Picture this, the week before Christmas 2018. The S&P 500 has just had the worst quarter of performance since Q3 2011. October down -6.91%, November up 1.85% and December down -10.33% by the 20th. Most market participants were shuddering at the thought of what another quarter was going to look like. It was a brutal quarter, and one that investors were just happy to have survived.

Fast forward twelve months and we have quite a different story.

Year to date, we have seen significant upside in major asset classes. 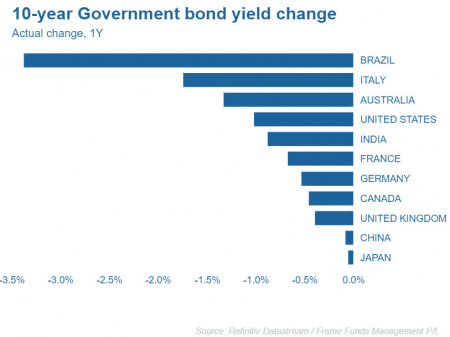 *Government bond prices have risen as yields have fallen. 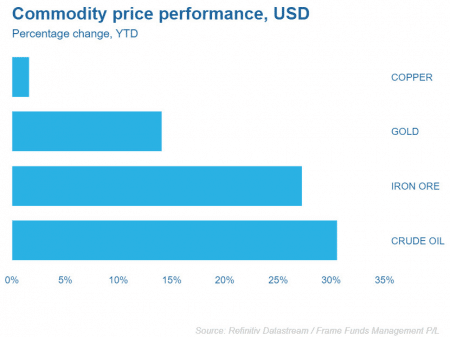 We will look at three catalysts for this dramatic change of events:

The US Federal Reserve is the largest holder of US government debt. As their US treasuries matured, they stopped rolling the proceeds into new US treasuries, essentially tightening the money supply within the treasury market. The image below shows this tightening of their balance sheet throughout 2019 up until September.

At the Federal Reserve’s final meeting of the year on the 20/12/2018, they continued with their policy communication that they would stay on the same path as they were on, attempting to cool the economy. The market did not like this rhetoric and dropped 4.7% over the next two days. However, on the 05/01 Jerome Powell did a complete 180-degree change in policy communication and stated they ‘wouldn’t hesitate’ to tweak their balance sheet reduction and that ‘Fed Policy is not on a pre-set path’. This change in policy communication immediately supported markets, with the S&P rallying 8.01% in January. 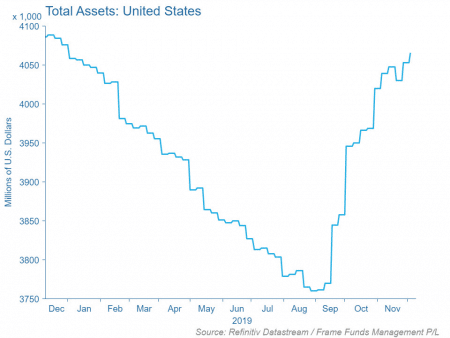 As noted above, poor equity market performance was not confined to the United States. Germany, France, Italy, China and Hong Kong were down -22.82%, -13.54%, -16.27%, -20.08% and -8.53% from 1 January 2018 to 20 December 2018, respectively. The economic data released from these economies had also deteriorated over the course of the year. This deterioration caused global central banks to adjust the tone of their policy communication from when they plan to stop their QE programmes and when they will increase interest rates, to how they will provide support to their slowing economies.

There was synchronised communication from global central banks. They all communicated that the next move for global interest rates would be lower and that there was the possibility that they would reinstate QE if economic data deteriorated further.

This change in rhetoric comforted investors. They essentially said that if global economic data deteriorated further, they would step in to provide stimulus and support. 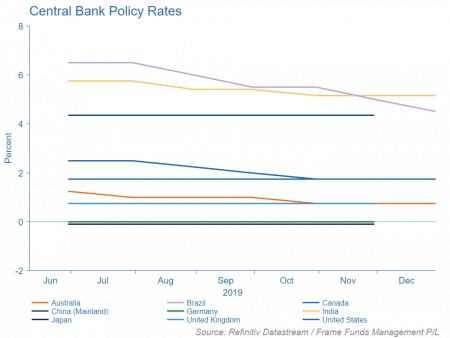 The US implemented the first China-specific tariffs on July 6, 2018, valued at around US$34bn. China then responded and imposed a 25% tariff on 545 goods which originate from the US, worth approximately US$34bn.

The tit for tatt between the two nations continued, both nations released additional lists of products which were under scrutiny for tariffs. This continued throughout the whole of 2018. However, as the year concluded with both the US & Chinese equity markets having experienced difficult years, lines of communication opened, and it seemed like there may be a resolution in the near term.

On the 2nd December 2018, the US and China agreed to a temporary truce and agreed to refrain from increasing tariffs or imposing new tariffs for 90 days as the two sides work towards a larger trade deal. After this truce, the US and China seemed to be actively working towards a trade deal. In January, a 3-day trade talk meeting occurred in Beijing. In February, talks occurred in Washington. China extended the suspension of additional tariffs on US autos and auto parts at the end of March. More trade talks occurred in Washington in April. In June a temporary truce was reached, days before the G20 Summit. In September, the US & China agreed to the 13th round of trade talks. In October 2019, the US announced the ‘Phase 1’ deal and delayed tariff increases on Chinese goods. In November 2019, US & Chinese negotiators talk over the phone and agree on trade points ‘in principle’.

Although there were times when communication released from both sides was contradictory, the general direction and tone was positive, which provided comfort to investors to re-enter equity markets.

2018 was an ugly year for most global equity markets, as well as most countries from an economic perspective. However, the rebound in equity prices we have seen in 2019 has been dramatic considering corporate profits have declined and economic data has either deteriorated or remained flat over the year.

The recent strong performance in equity markets can be attributed to increases in liquidity and the expectation that global central banks are willing to provide support if they see conditions deteriorate. Our focus is on the risk that the US & China are unable to come to a meaningful agreement and that the accommodative monetary policy is not going to be enough to support the current global economic downturn.