With the United States Election just around the corner, investors around the world are weighing up the economic pros and cons of each candidate.

National polling has Joe Biden up 7 -10 points, however this does not tell the whole story. Given the Electoral College system, national numbers do not matter as much as those in key “swing” states. Since 1960, the victor has always won a majority of Florida (Biden +2.2%*); Pennsylvania (Biden +5.6%*); Ohio (Biden +0.4%*); Michigan (Biden +7.1%*); North Carolina (Biden +1.4%*). While Biden has reasonable leads in all these States, the incumbent President Trump is still far from out of the race (considering tracking error and how these numbers will swing over the next month).

With that in mind, this article outlines the economic plans of each candidate and how they may impact financial markets.

So far, the Trump campaign has failed to release specific policies they plan to enact if re-elected. However, what we do know is the following:

So, what does this mean for the economy, particularly US equity markets?

Biden’s policy on renewables should see electric vehicle manufacturers flourish. With Tesla, Inc (TSLA) posting its fourth straight quarterly profit, we would expect to see a continuation of this success if Biden was elected. General Motors (GM), who are promising 20 new electric vehicles by 2023, could also see a boost. It is therefore likely battery metal explorers and producers will see increased money flow with increased battery demand and support. Increased infrastructure investment under a Biden Presidency should also see a boost to the construction sector. Key construction materials (iron ore, steel, copper etc) should also see similar money flow as demand rises in line with infrastructure spending. While an increased corporate tax rate could work to offset some of the gains seen from stimulus, the enormity of the stimulus plans from Biden and Harris (especially in the renewable energy market) should provide a boost to financial markets.

Trump’s policies, although lacking detail at this stage are expected to be much of the same as last term. This means that its good news for corporations with further company tax cuts on the cards, possible middle-income tax cuts and possible capital gain tax cuts. Trump’s plans should also provide a positive impact on financial markets.

Both candidates seem to be in favour of another round of stimulus and an extension of benefit payments to soften the economic impact of COVID-19. If Congress passes further stimulus, we should expect to see investor confidence continue to return and equity markets benefit. We may also see another wave of retail money enter the share market as household disposable income rises (the Council of Economic Advisors (CEA) August report noted disposable income has increased 5.4 per cent since February). 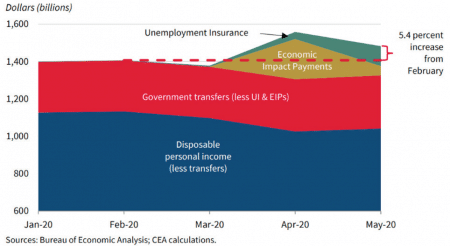 Further stimulus looks likely. It appears to be one of the few things the two candidates agree on. Battery metal miners and producers, as well as electric vehicle manufacturers will be ones to watch if the polls begin widening in Biden’s favour. With one more debate to come and the usual pre-election bombshells moments away, volatility is expected to continue in financial markets until after the election. COVID-19 news, how the economic recovery is progressing, US election developments and delays to further stimulus plans are all other factors which will provide two way volatility.