A message from Hue: What I saw in February 2022

Coming into the month of February, most market participants had hoped for a month with less volatility, however, what participants got was another wild period for global investment markets. We labeled January as the month of rotation, as investors moved money out of high-growth tech stocks and into investments that would benefit from a rising interest rate environment. February saw Russia invade Ukraine, which accentuated the volatility seen in January. In an environment that was already concerned with inflationary risk, the invasion of Ukraine, and the subsequently imposed sanctions on Russia, caused Oil, Wheat, Corn, and Natural Gas to rise by +8.70%, +21.94%, +11.43%, and +13.33% respectively, due to Russia being such a large producer of these commodities. Gold and Silver rose by +6.22% and +8.88% respectively, as investors rushed to physical safe-havens. The S&P 500, Nasdaq, and Dow Jones Industrial Average all declined by over -3.00%. The S&P/ASX 200 outperformed relatively to its peers, it rose +1.11%.

On the 21st of February, Russian officials recognised two self-proclaimed states in the Donbas and sent troops to the territories. Three days later, Russia launched a full-scale peacekeeping mission (invasion), Putin claimed the intention was to ‘denazify’ Ukraine. This move sent shock waves through global markets and has far-reaching implications on global trade, supply chains, and commodity prices.

On the 10th of February, expectations for a 50bps increase of the US Federal Funds Rate were 93.8%. At the conclusion of the month, expectations had dropped to 8.5%. Interestingly, expectations at the start of February were high because of the concerns of out-of-control inflation. In our view, the risk of further spikes in inflation had increased due to further supply chain disruptions and a reduction in global supply due to Russian sanctions. It is worth monitoring how the next round of inflation data looks considering the aforementioned price rises of these key production inputs. 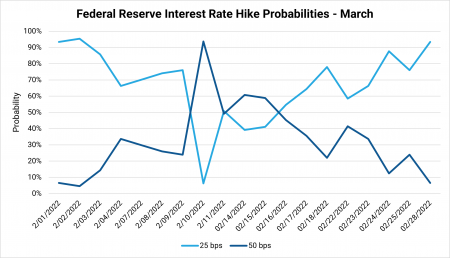 During February, both strategies had adapted to the environment of increased volatility in January which meant we were on the front foot. The Long Short Australian Equity strategy rose by +3.16%, while our global macro strategy dropped -0.88%.

The Frame Long Short Australian Equity Fund (FLSAEF) rose by +3.16%. Following on from last month, the systematic risk management of the strategy kicked into gear, which increased our cash levels. This meant we were in a proactive position to use the volatility seen in markets to our advantage.

March will bring with it the first-rate hike for this tightening cycle. With inputs for key production commodities hitting recent highs, we do not expect inflation measures within the next few months to surprise the downside. Taking that into consideration, we are structuring our portfolios for an environment where we expect inflation to overshoot is prudent.

If you would like to discuss any of these points, please email me at hue@framefunds.com.au or call our office on 02 8668 4877. 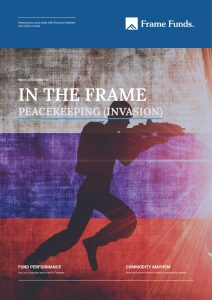