In the Frame - Issue 9, A message from Hue

A message from Hue: What I saw in September 21

September saw global equity markets sold off aggressively due to a combination of factors. The yield on 10 & 30-year US treasuries continued to rise, which gave investors a reason to start positioning their portfolios for higher interest rates in the future. We also saw Chinese property giant Evergrande, move to the brink of a collapse, as they failed to make their debt repayments. The S&P500 slumped by -4.65% while the Australian share market was the relative out-performer, as it declined by -2.69% for the month.

The story of the last 3 months really has been the iron ore sell-off. The sell-off accelerated during September due to the issues with Chinese Evergrande mentioned above. Australia’s largest miners felt the brunt of the selling pressure. Rio Tinto, Bhp Billiton and Fortescue continued to sell-off aggressively as investors attempted to assess the level of demand for iron ore due to a slowing Chinese property market. Although the recent performance of these companies has been poor, we are still optimistic on the long-term outlook for Fortescue in particular.

As Europe enter the colder winter months, markets assessed the level of natural gas available to supply this region. What was found was there is not an awful lot. Supply chain issues and underinvestment have meant that most regions are struggling to source enough natural gas to survive the winter. Russia to the rescue… but with strings attached.

Largest contributors for the Frame Long Short Australian Equity Fund were Oil Search Limited, Whitehaven Coal and News Corp, +0.67%, +0.40% and 0.38% respectively. The largest detractors were BlueScope Steel, Mineral Resources and Fortescue Metals Group, -0.89%, -0.86% and -0.79% respectively. The 12-month and CYTD performance of the FLSAEF continues at a solid +17.79% and +7.72% respectively.

The Frame Futures Fund (FFF) had a lacklustre month of performance dropping -2.17%. The trading strategies generated +0.69% while the core strategy detracted by -2.87%.

If you would like to discuss any of these points, please email me at hue@framefunds.com.au or call our office on 02 8668 4877.

Past performance is not an indicator for future performance. This is not intended to be financial advice and does not take into account any particular person’s circumstances. Before relying on this information, please speak to an independent financial adviser. 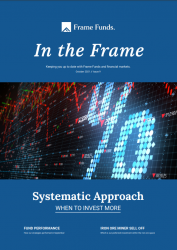