Battery metals poised for another big year in 2021

At the beginning of the year, we identified rare earth elements and battery metals as a key theme in our article “2020 Investment Themes & Opportunities”. The reasoning at the time was based on increased investor exuberance behind Tesla Inc. and the electric vehicle market generally, which would lead to demand increases further down the supply chain.

At the time of writing we said the theme required further evidence to suggest the demand turnaround and subsequent share price increases were sustainable. We provided an update on this theme in June “Rare earth elements update”, in which we noted the medium-term trend was turning and our theme was beginning to play out.

In the battery metal miner/producer space, Galaxy Resources (ASX:GXY), Syrah Resources (ASX:SYR) and Pilbara Minerals (ASX:PLS) are up 100%, 47% and 119% respectively year to date*. They have not only recaptured COVID-19 induced losses but by far exceeded them. However, this only tells part of the story, as it ignores the significant moves these companies have experienced in the second half of the year. Since the publication of our June update, they have gained 156%, 143%, 154% respectively.

In the rare earth element space, Lynas Corporation (ASX:LYC) is up 58% year to date and 74% from June. This aggressive price action can be attributed to a variety of factors, notably, a global economic policy push towards electric vehicles, increased global demand for the underlying commodities due to strong Chinese and European sales, investor short covering and geopolitical changes.

There has been a continuation of the global push towards electric vehicles (EV) in recent months. British Prime Minister Boris Johnson has announced the UK will ban the sale of new internal combustion powered vehicles by 2030, with the EU reportedly considering a ban in 2025. These decisions have made Europe the world’s largest EV market, with European EV sales exceeding Chinese EV sales in the first half of 2020 (Bloomberg). 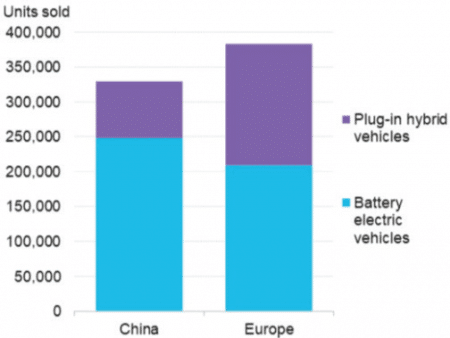 Joe Biden’s victory in the US Presidential Election is also a win for renewable energy and electric vehicles. He has promised $2 trillion in spending over the next decade to fight climate change, with a large portion of the investment focusing on the transition to electric transportation. These developments have been key contributors to the performance of the battery metal mining and producing companies over the last month.

As the above policies come into effect, it is expected there will be a demand driven increase in nickel, lithium and graphite prices. We have begun to see this already, with Nickel currently trading near 12-month highs.

PLS have stated that they believe the EV market will be dominated by lithium-ion batteries using high nickel cathodes and expect to see both nickel and lithium hydroxide demand increase commensurately. A global lithium demand surge is similarly being promised by GXY. SYR have touted the 69% year on year increase in EV sales as the key driver behind the uptick in natural graphite demand. 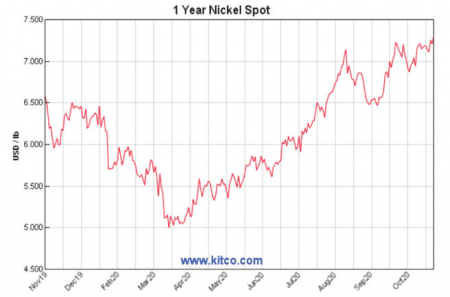 The covering of short interest has also contributed to the aggressive price increases in these companies. Year to date, GXY, SYR and PLS have seen their short interest decline markedly year to date.

As the battery metal turnaround theme developed throughout the year, investors have been forced to cover short positions to avoid further losses (as the price rises they must buy the stock on the market to cover their short positions). This forced buying has accelerated the price movements in these businesses (GXY, for example, has increased 45% month to date*).

Global tensions with China have escalated in 2020. Many countries including the United States and Europe have decided to decrease reliance on China for their critical mineral supply. To do this, they must look at sourcing these critical minerals elsewhere. Graphite, for example, has been declared a “strategic critical mineral” in the USA, EU and Japan, as the global anode supply chain is 100% reliant on China. A move away from China would see SYR (who have a graphite anode production plant in the USA) be a major beneficiary. LYC has signed a preliminary contract with the US Department of Defence to begin initial design work for a rare earth separation facility in Texas. They have also noted a strong appetite for separated heavy rare earth metals outside of China.

What to expect now?

With price rises as aggressive and significant as the ones we have seen this month, we would naturally expect to see a period of healthy consolidation. All companies that we are analysing are trading well above their 200, 100 and 60 period daily moving averages.

Their relative strength indicators (RSI) are all signalling that these companies are in an ‘extreme overbought’ state, so are overdue for a pull back. 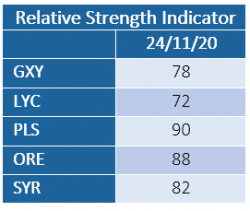 Ideally, we would like to see prices stabilise and the 200 & 100 period daily moving averages ‘catch up’ over the next quarter. Our expectations are that this theme will be picked up as a major theme for 2021 by most global investment houses, which should provide a wider investor base to support this investment theme moving forward.