In the Frame - Issue 7, Market insights

Over the last few months, we have seen the focus of the world’s media shift from the original COVID-19 strain to its younger sibling – the delta variant. The remainder of this piece will discuss the differences between the Delta variant and original strain in terms of transmissibility, hospitalisation rates, and deaths, as well as the potential economic impact of its spread.

The Delta strain of SARS-CoV-2 was first identified in India last December. It spread throughout India and the United Kingdom before reaching the United States and Australia. By the end of July, it was responsible for more than 80% of new US COVID-19 cases and is the variant that has caused New South Wales to be plunged into a now months-long lockdown.

The main cause of this rapid spread is due to Delta’s transmissibility compared to the original strain of the virus. According to Dr Perry Wilson, a Yale epidemiologist, the Alpha mutation (first found in the UK) was 50% more contagious than the original SARS-CoV-2 virus, but Delta is 50% more contagious again. Practically, this means in a completely unmitigated environment (no masks, social distancing, or vaccinations) one person infected with the original virus would transmit the disease to approximately 2.5 other people. In the same setting, a person with the Delta strain would infect roughly 3.5 to 4 other people.

The reason for the increased transmissibility is still under investigation, but preliminary and yet to be peer-reviewed studies suggest infection with the delta variant leads to greater levels of the virus accumulating more rapidly in human airways. This seems to then result in more viral particles being spread. Current speculation points to the P681R mutation of the Delta variant being responsible – it is believed the mutation causes the spike proteins to be split in a way that more effectively fuses with the cell membrane (shown in the diagram below). This ultimately means the variant can infect more cells in a given amount of time.

(Graphic produced by Nik Spencer (2021) and is based on work done by Hui Liu from the University of Utah).

As the delta variant is more infectious, hospitalisation rates are higher which makes logical sense – more people with the virus means an increased chance of an adverse reaction, leading to higher hospitalization rates. There is no evidence however that delta is more deadly than the original COVID-19 variant. Some preliminary studies from Scotland and Canada suggest that the risk of hospitalisation from Delta is higher than the original variant however these claims have not been peer-reviewed or verified.

It is also difficult to accurately compare death and hospitalisation rates, as the Delta variant emerged as the global vaccine rollout had started. Delta also may appear more infectious because it has caused more outbreaks in populations that contain higher risk factors, or in regions that had experienced more stress on their hospital systems.

One thing is very clear, however – the vaccines are still very effective against preventing serious disease and death at the hands of the Delta variant. Most studies have concluded that all vaccines currently being used in Australia (Oxford/AstraZeneca, Pfizer/BioNTech, and Moderna) significantly reduce the risk of death by more than 85%, regardless of the variant. All vaccines do not provide much protection after 1 dose, and full protection will not be provided until roughly 14 days after the second dose.

There has been a wide array of studies conducted on the various vaccines and their effectiveness in preventing infection, all with differing results. When talking about the efficacy of the vaccines, it seems the proof is in the pudding – if you compare the cases and deaths in the United States and the United Kingdom before and after the vaccine rollout, it is immediately evident that there have been far fewer deaths in the post-vaccine era.

Despite the spread of the Delta variant globally this year, global market indices have continued to rise. Since NSW entered lockdown at the start of July, the S&P ASX200 has stubbornly risen more than 2.5%. In that time most other states have also experienced snap lockdowns to contain cases as they emerged.

After looking at how aggressively the market rebounded in 2020, investors seem to feel they are better off remaining invested and buying any dip. This perspective is aided and abetted by central banks who continue to inject record amounts of liquidity into their respective economies and maintain accommodative policy settings. With such little return on low-risk investments, investors continue to believe accepting the equity risk premium is worthwhile.

We also expect another round of ‘revenge spending’, in particular when NSW reopens. While the latest round of government support is not as extensive as ‘JobKeeper’ and ‘JobSeeker’, there will undoubtedly be pent-up demand ready to be unleashed once the NSW economy is back up and running. We expect our ‘reopening’ businesses (retailers, travel companies et cetera) to make up some lost ground into the end of the year as vaccination rates hit targets and Australia once again becomes open for business. 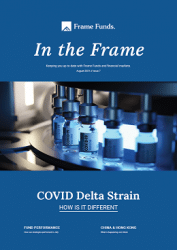