In the Frame - Issue 12, Investor updates

Units of the Frame Futures Fund appreciated by +5.62%. Both strategies contributed positively. The Fund’s trading strategies added +2.93%, while the core strategy added +2.57%.

During December, we saw two-way volatility that presented several excellent opportunities, which both strategies took advantage of. Markets swung lower at the start of the month, as investors repositioned on the uncertainty that the US Federal Reserve may or may not accelerate their bond tapering. During the FOMC meeting, Jerome Powell confirmed they would accelerate their bond tapering which was viewed positively by the market. We view an increase in the speed of their tapering as positive, as it allows them to have more control over inflation, while also providing additional ammunition if growth slows over the next 2 years. Interest rate markets are also pricing in three rate hikes during 2022, which in our view is unlikely (inflation dependent). Fixed income and currency markets continued to lack direction, while commodity markets were volatile but presented little opportunity. The number of Omicron cases exceeded 1m a day during December, however investors seem to have decided that the new strain is a blessing in disguise, as it is more transmissible and less severe.

Largest contributors to performance were our investments in listed iron ore producers (+2.64%) and our active trading strategies on the S&P/ASX 200 Future contract (+4.50%). Our investment in the China A50 was our largest detractor (-1.23%).

In terms of fund activity, we continued to add to our existing Nickel exposure, trimmed our digital currency exposure, and closed our listed iron ore producer exposure. We took advantage of two-way volatility in global equity indices near the start of December. These investments where shorter term in nature and paid off handsomely by the end of the month.

At the conclusion of the month, the Fund held 17 investments. 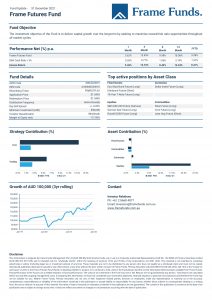