In the Frame - Issue 14, Investor updates

February saw Russia invade Ukraine, which accentuated the volatility seen in January. In an environment which was already concerned with inflationary risk, the invasion of Ukraine, and the subsequently imposed sanctions on Russia caused some key commodities to rise swiftly. Oil, Wheat, Corn and Natural Gas rose by +8.70%, +21.94%, +11.43% and +13.33% respectively, as Russia is globally a large producer of these commodities. Gold and Silver rose by +6.22% and +8.88% respectively, as investors rushed to physical safe havens. The S&P 500, Nasdaq and Dow Jones Industrial Average all declined by over -3.00%. The S&P/ASX 200 outperformed relatively to its peers, it rose +1.11%.

Largest contributors to performance were our active trading on the S&P/ASX 200 Future contract, Corn Futures trading and an investment in an ASX junior gold explorer. They contributed +2.47%, +0.70% and +0.46% respectively. Largest detractors were our investments in the Moex market and ASX listed technology businesses.

In terms of fund activity, we initiated a position within the Chilean share market, traded out of our Natural Gas & Corn positions. We also took advantage of expanded volatility by trading the Russian Ruble, Nasdaq, and S&P 500 Future contracts.

Our focus now turns to the upcoming US Federal Reserve meeting and further inflationary data from the US. We remain defensive and look to use any market volatility to our advantage. 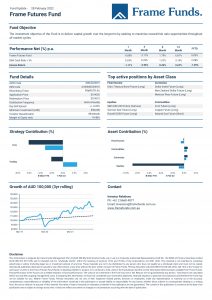