In the Frame - Issue 17, Investor updates

The core strategy once again suffered, as indiscriminate selling occurred across the strategy’s investment universe. Over the previous two years, we have benefitted from holding high conviction investments in the small to mid-cap space, in companies which were exposed to our key macro-economic themes, however, over the last quarter, these positions have been the largest drags on performance.

The market has now reached a point where the US Federal Reserve has caught up to market expectations. In our view, it means that the indiscriminate selling which has occurred over the prior the months, may subside over the short term, however until either the US Federal Reserve pivots, or demand destruction occurs on a greater scale, we will continue to be underweight (short) equities in the short term. Fixed income markets continue to present opportunities, however, are also trying to determine if rates are needed to be priced higher from here, or if growth is going to roll aggressively, which would justify lower rates in 12 months’ time.

Largest contributors to performance were short investments on the Ethereum, Bitcoin and Euro Stoxx 50 future contracts. Largest detractors were trading on the S&P/ASX 200 future contract and the basket of ASX listed companies mentioned above.

In terms of fund activity, we continued to reduce exposure out of individual ASX stock positions. These smaller cap businesses thrive during periods of economic expansion, however when liquidity and funding dries up, can drag (as seen over the last quarter).

Looking forward, we continue to monitor how inflation responds to further interest rate increases. We will be looking for a leveling of headline inflation to occur before actively looking at additional positions in our long portfolio.

At the conclusion of the month, the Fund held 12 investments. 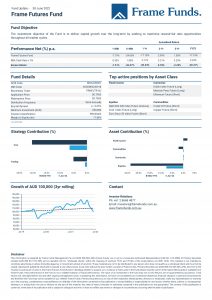