In the Frame - Issue 15, Investor updates

Units of the Frame Futures Fund appreciated by +8.15%. The Fund’s trading strategies generated +1.41%, while the core strategy added +6.59%.

March can be described as a month of two halves. Continuing on from what we have seen since the start of the year, global equity markets continued to drift lower for the first week of the month, as investors focused on the Russian invasion of Ukraine, while also assessing the path of interest rates. Yields across the globe continued to rise, as expectations for higher rates became priced in. The commodity complex experienced erratic price action, while volatility expanded across currency markets, which presented numerous opportunities. Equity markets started to find their feet after US Federal Reserve President, Jerome Powell increased rates by 25bps, and stated that they think a recession is very unlikely in the near term. Following the Federal Reserve meeting, equity markets rallied for the remainder of the month, and finished in the green. To emphasise the volatility, the Nasdaq entered a technical bear market early March, then proceeded to rally ~17% off lows.

Largest contributors to performance were our active trading on the S&P/ASX 200 Future contract, investment in an ASX listed technology business, and our investment in the Chilean equity market which was initiated last month, they contributed +1.27%, +1.61% and +0.80% respectively. Largest detractors were our investments in the Moex market and Crude Oil Future trading.

In terms of fund activity, we took profit on most of our Fixed Income exposure, in our opinion these markets moved to extremes and fully priced in rate hikes. We closed our investment in an ASX listed blockchain technology business. We also took advantage of the expanded volatility within currency markets.

Our focus now turns to monitoring economic data, in particular manufacturing input costs, which may accelerate inflation readings over the next 3 months. We will closely monitor how the US Federal Reserve responds to such increases in CPI.

At the conclusion of the month, the Fund held 29 investments. 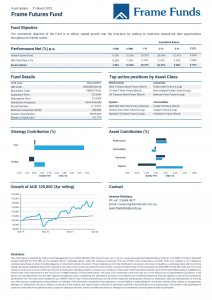