In the Frame - Issue 9, Investor updates

The trading strategy contributed +0.69%. Equity and Commodity investments detracted approximately -2.38% and -0.30% respectively, while Currencies and Fixed Income investments rose by +0.48% and +0.27% respectively.

Global equity markets sold off aggressively due to a combination of factors. The yield on 10 & 30 year US treasuries continued to rise, which gave investors a reason to start positioning their portfolios for higher interest rates in the future. During the month we also saw Chinese property giant Evergrande, move to the brink of a collapse, as they failed to make their debt repayments. These factors caused the S&P500 to slump by -4.65%. The Australian share market was the relative out-performer, only declining by -2.69% for the month.

Largest contributors to the performance were our active trading strategies on the S&P/ASX 200 future contract (+2.45%) and our investment in Liontown Resources Ltd (+1.85%). Our investment in Fortescue Metals Group was the largest detractor to performance once again, however we remain positive on the long-term outlook for the business.

In terms of fund activity, we started to accumulate positions in a variety of ASX-listed Nickel companies. We also continued to reduce the number of holdings in businesses where our level of conviction had waned. We used the sell-off in US equities as an opportunity to increase our holdings in the Nasdaq and the Russell 2000.

At the conclusion of the month, the Fund held 24 investments. 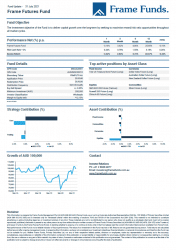