In the Frame - Issue 8, Investor updates

Units of the Frame Long Short Australian Equity Fund decreased -1.55% in August. Comparatively the S&P/ASX200 rose +1.92% for the period.

August was a very busy month for the Australian share market, as a significant amount of companies reported their results for the previous financial year. The focus seemed to be on outlook, which most companies found difficult due to the lockdowns currently taking place across Australia. The ‘peak growth’ narrative continued to persist, which explained the premium placed on companies that issued positive forward guidance. A weakening Chinese economy fuelled this perspective, as soft steel consumption and production data caused a sharp sell-off in iron ore. The S&P/ASX200 materials sector suffered as a result, finishing the month down -7.93%.

Blackmores Limited (ASX: BKL) was the top equity contributor this month, it contributed approximately +1.45%. BKL rose as much as 25% off the back of their annual report where they announced increased revenue and gross profit margins. Virgin Money UK CDI (ASX: VUK) contributed +0.34% as the market continued to digest a positive third quarter update from late July. Premier Investments Limited (ASX: PMV) added +0.29% as investors looked past current lockdowns to the expected wave of spending once the New South Wales and Victorian economies reopen. Discretionary trading in the S&P/ASX200 SPI futures contract also contributed +0.89%.

Our investments in the materials space were the main detractors from performance. Mineral Resources Limited (ASX: MIN) detracted approximately -0.93% after they missed EBITDA expectations in their 2021 financial year report. Boral Limited (ASX: BLD) and BHP Billiton Limited (ASX: BHP) also detracted. The latter suffered at the hands of declining iron ore prices, while the former faced headwinds after an underwhelming financial report and continued fallout from the failed Seven Group Holdings (ASX: SVW) takeover. The general theme in August was many of our investments struggling to meet market expectations after moving aggressively higher prior to the release of their annual reports.

We exited our investment in Costa Group Holdings (ASX: CGC) as they failed to signal any real expected growth over the next year. Our largest sector continues to be materials however its weighting has decreased to 41.97%. We were able to take advantage of volatile price action in A2 Milk Company Limited (ASX: A2M) and Nuix Limited (ASX: NXL) as investors positioned themselves prior to the release of their financial reports.

At the conclusion of the month, the fund held 23 investments. 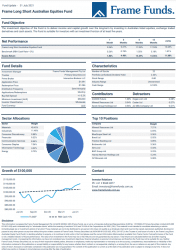