In the Frame - Issue 14, Investor updates

Units of the Frame Long Short Australian Equity Fund increased +3.16% in February. Comparatively, the S&P/ASX200 rose by +1.11% over the same period.

February was a very busy month in terms of half-year company reporting and news headlines. The month began with hawkish pivots from global central banks about inflation concerns. The Reserve Bank of Australia held their first meeting of the year, where they noted inflation and the labour market were both running hotter than expected. As a result, they chose to end their asset purchase program, stemming the flow of additional liquidity to the bond market.

Towards the middle of the month, tensions between Russia and Ukraine reached boiling point when President Putin declared separatist regions of Ukraine independent and sent in ‘peacekeeping’ forces. This culminated in a full-scale Russian invasion of Ukraine that has been met by harsh financial sanctions from western nations. After an aggressive initial sell-off, the market is still attempting to accurately price the impact of these sanctions and the possibility of further escalation.

Fortunately, our aggressive risk management practices in January paid dividends last month. Our reduced exposure meant we were sheltered from some of the considerable volatility that plagued the market. The strategy continued to exit positions as tight risk measures remained in place. We feel comfortable continuing to exit the market and being underinvested in the current geopolitical environment. Over the course of the month, we increased our allocation to the discretionary active trading strategy. This strategy contributed +2.07% to the final performance.

The largest equity detractors were News Corp (ASX: NWS), Iluka Resources (ASX: ILU), and Ampol Ltd (ASX: ALD). They detracted approximately -0.15%, -0.12% and 0.06% respectively. All three companies were disappointed with their half-year reporting results. We have since exited these positions.

At the conclusion of the month, the fund held 5 equity investments. 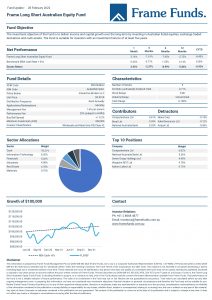