In the Frame - Issue 15, Investor updates

Units of the Frame Long Short Australian Equity Fund increased +1.20% in March. Comparatively, the S&P/ASX200 rose by +6.39% over the same period.

March was another volatile month for financial markets as the Russia-Ukraine conflict continued to unfold. The month began in a choppy fashion as the true impact of the war on global supply chains and prices remained unknown. Optimism returned to equity markets after negotiations between Russia and Ukraine seemed to progress positively. The market rallied nearly 7.5% off the month’s lows to finish in the green year-to-date.

It was a busy month for the fund. We continued to increase portfolio diversification as the market gathered momentum. Many of the recently acquired businesses are poised to benefit from the continuing tensions between Russia and the West. Allocations were made in sectors such as materials, energy and agriculture.

Top equity contributors were AVZ Minerals Limited (ASX: AVZ), Brickworks Limited (ASX: BKW) and National Australia Bank Limited (ASX: NAB). They contributed approximately +0.68%, +0.37% and +0.29% respectively. AVZ benefitted from soaring lithium prices and a return of positive investor sentiment to the battery metal space, while Brickworks rose after they released positive first half results. NAB continued to trend higher as money was allocated broadly into the Australian financial sector. Generally, financials perform better as interest rates rise due an expansion of their net interest margin. The active trading strategy also added +0.59%. It compensated for the core strategy being underinvested for the first half of the month.

Largest detractors for the month were Whitehaven Coal (ASX: WHC), Incitec Pivot (ASX: IPL) and Atlas Arteria Group (ASX: ALX) which detracted -0.39%, -0.33% and -0.23% respectively. Weaker coal demand from China sparked profit taking in Whitehaven. The Chinese government continues to pursue a ‘zero Covid’ policy which decreases energy usage as entire cities are locked down. Investors also took profit in Incitec Pivot as positive news out of Ukraine suggested a resolution could be around the corner. This would ease pressure on global fertilizer supply and bring prices down.

The fund currently holds 30 equity investments and materials is the highest weighted sector at 41.52%. 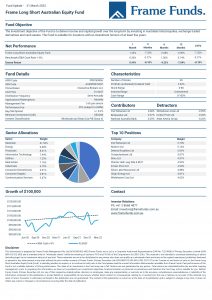