In the Frame - Issue 11, Investor updates

Units of the Frame Long Short Australian Equity Fund decreased -1.06% in November. Comparatively the S&P/ASX200 declined -0.92% for the month.

Financial markets and global central banks continued to face off over the timeline of policy tapering and interest rate increases in November. Yields continued to rise for most of the month, at least until news of the new ‘Omicron’ COVID-19 variant broke out of South Africa. Upon its discovery, money was aggressively pulled from equity markets as uncertainty over the transmissibility and virulence of the new strain circulated.

Largest detractors were Pinnacle Investment Management Limited (ASX: PNI), Oil Search Limited (ASX: OSH) and Bank of Queensland Limited (ASX: BOQ), which detracted 0.64%, 0.49% and 0.39% respectively. Pinnacle fell after they announced a raising to acquire 25% of Five V Capital. Their Executive Director also announced the sale of a portion of his shares. Oil Search suffered from the sharp decline in the price of oil after the Omicron variant news, while Bank of Queensland was not immune to broader financials sector weakness. Our heaviest weighted sector is now materials at 21.28%. 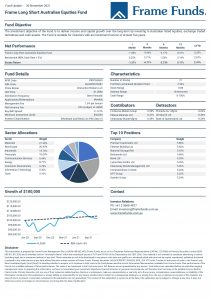