In the Frame - Issue 10, Investor updates

Units of the Frame Long Short Australian Equity Fund decreased -1.21% in October. Comparatively the S&P/ASX200 declined -0.12% for the month.

October was characterized as a relatively low volatility month, as the Australian share market closed fractionally lower. Investor focus was on the bond market as yields spiked due to inflationary concerns. There appeared to be a mismatch between central bank rhetoric and market pricing of interest rate expectations around the globe. It remains to be seen if central banks will succumb to market pressure or continue with the same tapering timeline. Only time will tell.

The largest detractors were NewsCorp (ASX: NSW) and Bank of Queensland (ASX: BOQ), which cost -0.37% and -0.31% respectively. NewsCorp fell after the release of their 2021 annual report, despite reporting their most profitable year on record. Bank of Queensland fell after they completed the sale of St Andrew’s Insurance for a loss. After a considerable reshuffle of the portfolio over the last two months, real estate is now our heaviest weighted sector at 19.88%. 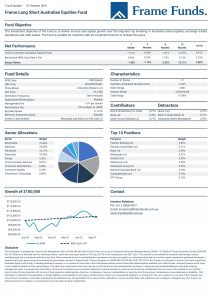