Investment themes worth backing in 2021

As share markets crashed across the globe in March and April, central bankers reduced interest rates and Governments expanded their balance sheets to soften the economic blow of COVID-19. They provided support to people and businesses which allowed them to isolate in an attempt to contain the spread of COVID-19. Due to this, the Federal Reserve saw its balance sheet swell by $3.05trn between Jan’20 and Dec’20. This figure equates to 14.3% of annualised GDP. During the GFC (Aug’07 and Apr’09), the Federal Reserve increased their balance sheet by $1.33trn which was 9.2% of annualised GDP. This comparison demonstrates the current size of the fiscal response by Governments and central banks. 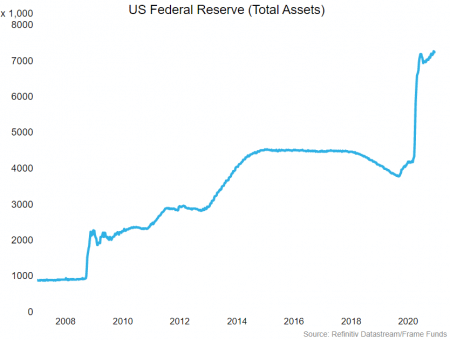 With the vaccine roll-out now underway across the globe, focus for Governments and central banks now turns to reflating their economies.

As seen in the GFC, the Federal Reserve increased their spending on infrastructure; building new schools, roads and hospitals. They also provided funding to businesses to hire staff and grow their businesses more aggressively. We saw companies that produced the raw materials required to complete these new projects benefit. Steel, copper, iron ore, coal and oil to name a few. 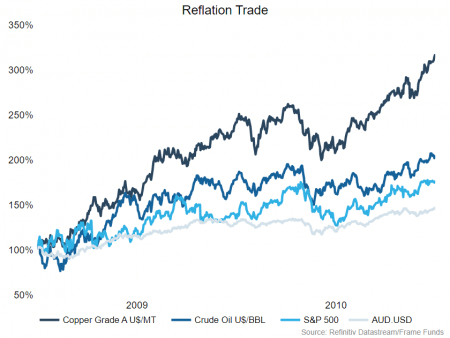 Other assets that are components of the reflation trade are the fixed income and currency markets. As expectations exist for further fiscal stimulus, generally fixed income markets rise and yields fall. Commodity based currencies, (AUD and CAD) have generally risen as they are seen as ‘risk-on’ currencies. Also a large component of their GDP is generated from the export of the aforementioned raw commodities.

Over the last six months, we have seen the reflation trade begin to play out. Although some ASX listed companies have already appreciated significantly, we would like to see a period of consolidation. That being said, we expect this to be a key theme to monitor for 2021.

At the end of 2019, we identified rare earth elements and battery materials as a key theme for 2020. The reasoning at the time was based on increased investor exuberance behind Tesla Inc. and the electric vehicle market in general, which would lead to increased demand further down the supply chain.

In our article, “2020 Investment themes“, we said the theme required further evidence to suggest the demand turnaround and subsequent share price increases were sustainable. We provided an update on this theme in June “Rare earth elements update“, in which we noted the medium-term trend was turning and the theme had begun to play out.

Since then, prices of listed ASX rare earth & battery material companies have continued to rise due to a number of factors; governmental support, global demand, short covering and geopolitical changes. These developments have supported this theme. Due to the extreme nature of the price moves we have recently seen; we would anticipate a period of healthy consolidation. At the time of writing most of the larger ASX listed companies have raised additional funds via private placements and entitlement offers to fund their businesses for their next leg of growth. 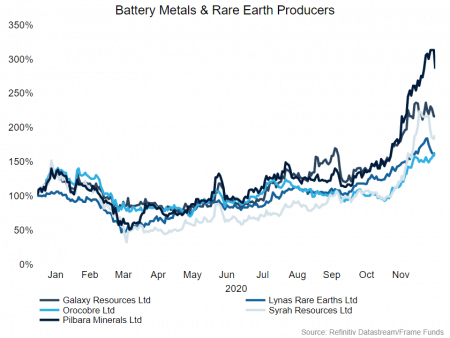 We have now seen this theme turn from an evolving theme, into a core portfolio theme. We expect the majority of global research houses will identify this as a key theme for 2021. This attention should provide a wider investor base to support this theme moving forward.

Joe Biden’s victory in the US Presidential Election is also a win for renewable energy and electric vehicles. He has promised $2trn in spending over the next decade to fight climate change, with a large portion of the investment focused on the transition to electric transportation. 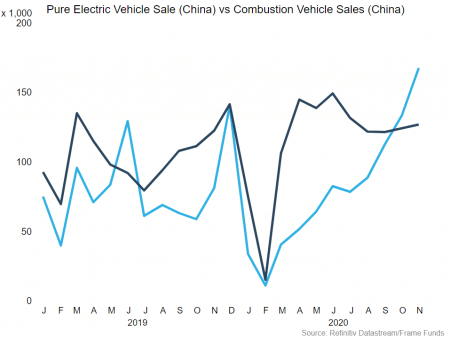 2020 saw COVID-19 condense years of technological adoption into a matter of months, as businesses, schools and governments were forced to move their operations online or face losing them altogether. Cash was abandoned with payments processed electronically. Lockdowns and travel restrictions meant that if any aspect of pre-pandemic life were to be maintained, technology needed to be quickly integrated. Companies which helped navigate social distancing thrived, as ‘work from home’ became the new normal. Although the prospect of a vaccine and return to normality seems increasingly likely in the near term, we continue to see technological adoption as inescapable and a key theme for markets during 2021.

Retailers were some of the hardest hit by COVID-19, as stores were closed and foot traffic dried up. Pure play online retailers and retailers who invested in creating and improving their digital sales channels flourished. We expect this trend to continue in 2021, however we favour commoditised retailers who have grown their online sales channels. These businesses benefited from serving their existing customer base online, whilst also attracting new customers. 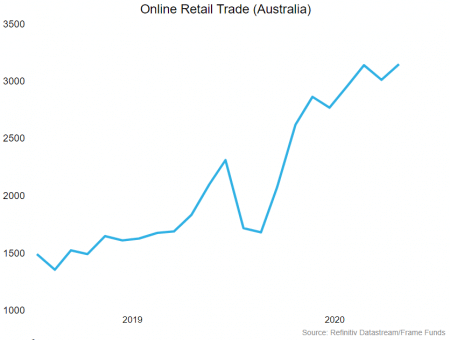 In some businesses, we see the spike in sales as temporary, however for the majority of high quality retailers, we view it as a structural shift in the buying behaviour of consumers.

Telehealth unsurprisingly boomed in 2020 as an inability to meet in person forced doctor consultations online. Referring to the US, “In February’20, just 0.1% of primary care visits covered by traditional Medicare were done via telehealth. By April’20, it was 43.5% — more than a 400-fold increase.” – Alex Azar, U.S. Secretary of Health and Human Services. Although expected to snap back in 2021, telehealth will continue to benefit in 2021 albeit at a slower pace. 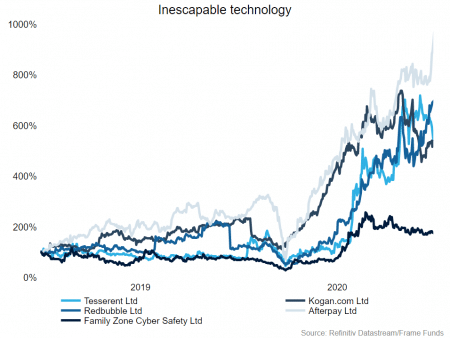 Increased digitalisation of our economy also increases the risk of cybercrime. We saw multiple cyber attacks in Australia during 2020, including a possible state sponsored attack on the NSW government in June. Cyber attacks pose a large risk to Australian businesses who fail to securely manage their digitisation. The Federal government’s announcement of a $1.66 Billion cyber security package in August has acted as a tailwind for a number of Australian cyber security providers. We expect this to continue into 2021 and beyond.

We have identified three other tactical themes in the original version of this article here.