In the Frame – Issue 1, Market insights

In our article ‘Investment Themes 2021’ released in December, we identified the ‘reflation trade’ as one of our three core themes for 2021 and beyond. This article will provide an update on what Governments and central banks around the world have implemented to reflate their economies. We further consider how commodities, equities, fixed income and currency markets have performed during previous periods of reflationary policy.

In the aftermath of an economic crash, there are usually several waves of monetary and fiscal support.

The first wave generally involves providing liquidity to the financial system. This may be executed by the reduction of interest rates or by providing additional funding facilities. This was seen last year, when the United States Federal Reserve provided additional liquidity to the financial sector via Repo and Reverse Repo Operations. Between December 2019 and April 2020, the effective Federal Funds Rate was cut from 1.58 per cent to 0.05 per cent while the US Federal Reserve expanded their Repo operation limit to $17.3trn in March 2020 vs $2.8trn in January 2020.

Generally, the second wave of support is to provide assistance to businesses and people that have been most affected by the economic crash. In March last year the US Congress passed a $2.2 trillion dollar coronavirus relief bill – this included just over $500 billion in large business and local government loans with a further $377 billion in small business assistance. An additional $830 billion was released in tax cuts and expanded benefits.

As the economic collapse bottoms and stabilises, governments and central banks start to turn their attention to the reflation of their economies. This usually involves the continuance of highly accommodative monetary policy from central banks (maintaining low interest rates and open market operations to increase the supply of money). Governments supplement this supportive stance with further fiscal stimulus, usually in the form of infrastructure spending, job creation benefits and direct transfers, essentially anything that will assist the economy to reflate. As an economy does start to recover from an economic crash, we have historically seen some assets do exceptionally well. Below we discuss a number of these.

Reflation based stimulus packages traditionally focus on infrastructure spending. This is where Governments spend money on facilities that will have the greatest public benefit such as hospitals, schools, airports and roads. In November last year, the United Kingdom government confirmed it would spend £100 billion on infrastructure in 2020-21. The Biden administration pledged nearly $2 trillion to infrastructure causes during their presidential campaign and now with a Democratic Congress, investors are optimistic they will follow through. These infrastructure projects require large volumes of steel (produced from iron ore & coal), copper (for electrical wiring) and oil (for power generation).

Copper and iron ore are currently trading close to 5-year highs as the reflation trade gets underway, however we would expect demand to continue to strengthen. Chinese steel production was on track for a record year of production in 2020, with output expected to top a billion tonnes. While current Chinese output is not at capacity (mills are only operating at 82.2 per cent at time of writing) we believe global steel production will increase in 2021. 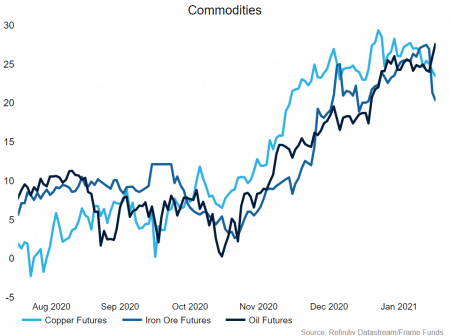 As more details are released about fiscal stimulus, as well the continuation of existing plans, we expect to see iron ore, copper, coal, steel, and oil continue to appreciate as demand strengthens.

In the aftermath of the GFC, we saw global central banks reduce interest rates and expand their balance sheets via bond purchases as they injected money into the economy to boost growth. Currently we see banks offering record low interest rates in combination with government support. This environment has boosted personal disposable income since the start of the pandemic. With the return on cash, term deposits and fixed income at all-time lows, money has flocked to equity markets as investors allocate to assets where they feel they may get a higher rate of return. This can be seen in the performance of the S&P ASX 200 rebounding approximately 46% from March 2020 lows. 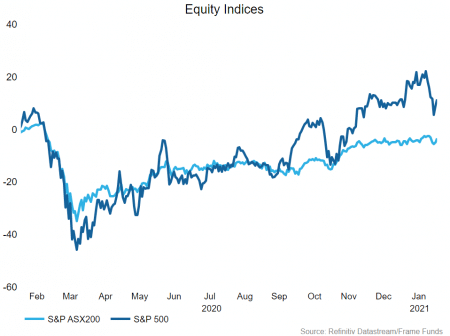 With interest rates forecasted to stay low for the foreseeable future and continued support from global governments looking likely, we expect to see a continuation of this bullish trend in global equity markets.

If the reflation theme plays out as expected, we expect to see companies who are focussed on mining and producing the aforementioned commodities outperform. As demand for these commodities increase, prices should continue to rise which would result in the expansion of their profit margins. Another sector that may directly benefit from infrastructure spending is construction. New home building projects will increase in conjunction with trade-based employment incentives designed to encourage businesses to take on more apprentices and get people back to work.

Fixed income markets traditionally rise as reflationary policy begins to take shape. This is largely due to the dovish commentary coming from the US Federal Reserve and the belief interest rates will be held at lows for some time. This was seen in the aftermath of the GFC where the Federal Reserve kept the Federal Funds rate close to 0 for nearly 7 years after the bottom of the market. Although our view is that interest rates will stay lower for the foreseeable future, we are aware that if the economy rebounds faster than expected, the US Federal Reserve may adjust their outlook which would cause Fixed Income markets to decline. 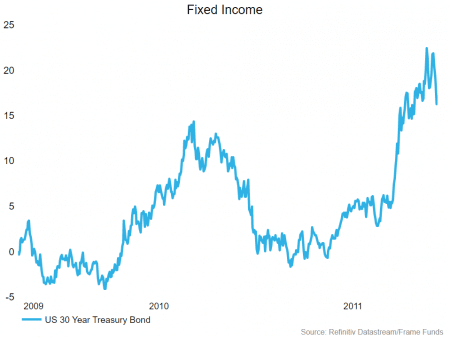 Taking the commodity component of the reflation trade into consideration, we expect to see ‘risk-on’ currencies (currencies of countries that have commodity exports as a large portion of their GDP) appreciate as the global economy rebounds. Included in ‘risk-on’ currencies are the Australian and the Canadian Dollar. Mineral fuels (including oil) contributed 22 per cent of Canada’s total exports and 32.6 per cent of Australia’s total exports. Iron ore contributed a further 28.9 per cent of Australia’s total exports. As demand for these exports increase, so does demand for the respective currencies. We have already seen the beginning of this price action over the last 6 months. 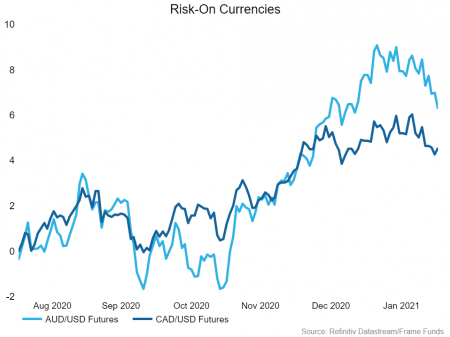