Market commentators and traders are increasingly discussing the strength of Oil and whether we will see it climb back to the psychologically important level of $100usd per barrel. On a momentum basis, this view is well warranted, Brent Crude is up ~170% from its February 2016 lows and up 22% YTD.

There are multiple reasons why we have seen Oil prices rally over the last two years, however the two major catalysts have been the agreements to freeze production, led by Saudi Arabia and Russia in late 2016 and more recently, the United States sanctions that are to be implemented on Iran from November 4. The impact of the latter on global Oil production is a reduction of approximately 1millionbarrels a day. President Trump demanded Saudi Arabia and Russia to increase their output by 1million barrels per day, however they have rejected these demands.

President Trump has an incentive to keep Oil prices low. Rising oil prices squeeze the consumer and offset the personal income gains generated from the tax cuts which were implemented on the American public. Furthermore, large spikes in oil prices can cause spikes in inflation and worsen the effects of a recession. 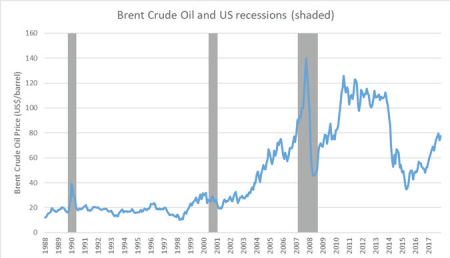 Trump has been open about his dislike for the price of Oil, stating that it is artificially high, and OPEC is to blame. He tweeted on the 20th September 2018: “We protect the countries of the Middle East, they would not be safe for very long without us, and yet they continue to push for higher and higher oil prices! We will remember. The OPEC monopoly must get prices down now!”. More recently, President Trump used his speech at the United Nations General Assembly on the 25th of September 2018 to highlight “OPEC nations, as usual ripping off the rest of the world.” It seems the simplest way to reduce the Oil price, is by increasing supply. American supply more specifically.

Given the Trump administration’s track record of providing fiscal stimulus to ‘Make America Great Again’, we focus our attention on investment opportunities within the American Oil and Gas Sector. One solution to the high Oil price, is by Trump encouraging (through the implementation of accommodative policy) American Oil & Gas producers to produce more Oil.

The XOP (S&P Oil & Gas Exploration & Production Exchange traded fund) returns closely track the Brent Crude price with a correlation of 0.66 this year alone. Rather than take a position directly in the XOP, structuring an absolute return investment of buying the strongest companies and selling the weakest companies within this ETF, may provide better risk adjusted returns.

We have analysed the five biggest & smallest Oil producers included within the XOP index. The following table summarises their YTD performance and oil production. 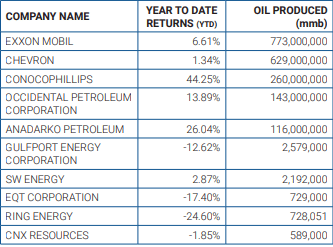 With the XOP having a correlation of 0.66, the outcome of purchasing this Index would be very similar to the buying Brent Crude directly. By investing in an absolute return manner, we anticipate lower volatility if we do see any of the numerous risk factors surrounding the Oil & Gas market emerge.