In the Frame – Issue 1, Stocks in play

As discussed in our reflation trade update, a combination of Government/Central bank stimulus and a declining US dollar saw base commodities emerge as winners of the COVID crises. Ultimately, the thesis rests upon building our way out of the COVID induced recession. In this article we explore the moves in iron ore and copper, as well as taking a look at the companies who have been able to capitalise on it.

The chart below illustrates base commodity strength since the market lows in March 2020. An investor with the foresight to allocate to base metal miners, in particular iron ore miners would have seen excellent returns in 2020. Getting exposure to base commodities can be seen as risky business if investors are not properly diversified. Although we outline some individual companies that fit this thematic, it is always advised to maintain diversification across an investment portfolio. 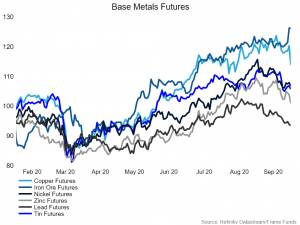 Iron ore was a stand-out performer in 2020. It benefited from China’s spending on infrastructure and the subsequent ramp up of steel production to meet this spending induced demand. With iron ore prices currently over US$150 a tonne, the big Australian miners (FMG, BHP & RIO) are cash generating machines. Due to extensive investment in mine infrastructure and cost cutting initiatives, these Aussie miners are each able to produce iron ore at under $15 a tonne. FMG is the largest pureplay iron ore producer on the ASX with 100% of revenues attributable to iron ore, compared to BHP and RIO which are both diversified with 64% and 62% of total group revenue derived from iron ore, respectively. The chart below explores the market capitalisation, production, costs and diversification as at 3rd of February.

Despite the dominance of the big three players there are several smaller ASX companies who provide exposure to iron ore. One is Fenix Resources (ASX:FEX) who have just commenced production at their flagship Iron ridge project in WA. The project hosts a mineral resource estimate of 10.5mt @ 64.2% and management have forecasted FY21 annual production of 1.25 MTPA.

The mine is anticipated to run for 6 years with 8 million tonnes of iron ore expected to be produced over its lifespan. The operating costs of FEX are significantly higher than FMG, RIO & BHP with forecasted cash costs per tonne of $78.86.

The investment is highly speculative due to a lack of operational history at the project. A positive catalyst for the company would be the successful completion of its first iron ore shipment which is due for release early February 2021.

Copper has shown itself as a star performer of the reflation trade. The copper spot price has bounced over 46% from its March low of $2.15 to its last traded price of $3.55 on the 4th of Feb 2021. ASX large cap copper producer Oz minerals (ASX:OZL) has shared in the success, notching up a gain of 218% from its March lows.

Despite several large cap producers with copper exposure, there seems to be a lack of quality exploration and development opportunities on the ASX. Investor exuberance around potential copper discoveries is rife, a key example of this was Hammer Metals (ASX:HMX). They produced a solid copper hit on the 20th of January 2020 and saw its share price appreciate from 3.3c to 9.2c in one day, a gain of almost 280% despite only owning 40% of the project. This exuberance for copper assets, has seen multiple junior explorers pivot their focus to acquire dormant copper assets which present value in the current climate.

One particular explorer we are watching is Eagle Mountain Copper (ASX:EM2). EM2’s key focus is on its Oracle Ridge & Silver Mountain project in Arizona. Its primary aim is to become a low cost, sustainable supplier of copper to the green energy sector.

Oracle Ridge already has an existing underground mine as well as an existing high-grade copper/silver resource, however their current focus is on expanding this resource. We favour companies who focus on green production, as we expect these companies to not only benefit from a rising copper price, but also demand a premium to their product for its sustainability.