In the Frame - Issue 11, Market insights

Taper Tantrum Take 2? Why it’s not likely to be the case.

With the Federal Reserve beginning to taper their asset purchases this month (December 2021), the question has to be asked – will we see a repeat of the 2013 taper tantrum?

Recapping what happened in 2013

In May 2013, then Fed Chair Ben Bernanke revealed the Fed was thinking about tapering its asset purchases in testimony before Congress. Equity markets dropped and yields rallied.

A month later during the June FOMC press conference, Bernanke softened market expectations by confirming any purchases would depend on economic outlook and that changes to the bond purchase program would be independent from interest rate policy (sound familiar?). From May highs to June lows, the S&P 500 fell nearly 8%, however stocks seemed reassured after the softer tone in the June FOMC press conference.

When the Fed finally decided to start moderating its bond purchases to the tune of $10bn per month in December 2013, the S&P 500 had risen ~19% from June lows. From the first whispers of tapering in May, to the decision to start in December, the 10-year US government bond yield rose ~140 basis points. 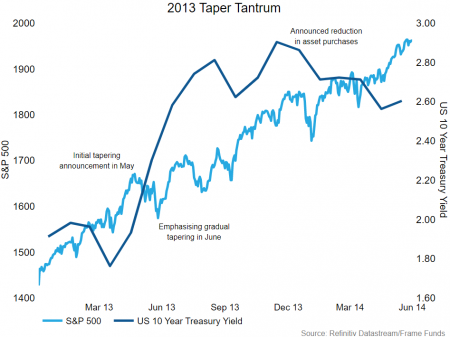 When the Fed decided to begin tapering (December 2013), core PCE inflation was 1.6 percent, unemployment was 6.9 percent and total assets held by the Fed were worth a mere $4 trillion. 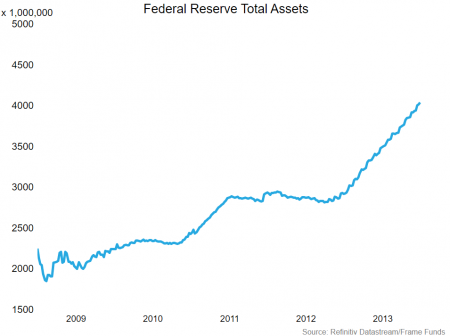 Over the following years, the 10-year yield steadily declined as money flowed back into bonds. Yields would reach lows in mid-2016 and equity markets rose modestly over the same period (the S&P 500 rose just shy of 15%). The end of 2016 marked the beginning of two years where interest rates rose. Somewhat surprisingly, equity markets also increased sharply until the second half of 2018. As you would expect, yields increased until the Fed signaled it would back off on further rate hikes in late 2018 as the US economy slowed.

At this time, the Fed’s total assets held steady at around $4 trillion, with core PCE inflation and unemployment at 2 percent and just below 4 percent respectively.

Now fast forward to the post COVID crash world we live in – core PCE inflation is 4.1 percent, the unemployment rate is 4.2 percent and the Fed’s assets total $8.66 trillion.

Despite these staggering figures, the Federal Reserve has been determined to not repeat past mistakes and turn their bond purchasing taps off too soon. The result has been one of the most aggressive equity bull markets in history, with the S&P 500 rising ~120% from 2020 COVID lows to 2021 November highs.

In recent months we have seen yields increase at the front end of the curve as rate hike expectations have been priced in. Softer price action in longer-dated treasuries has resulted in bearish curve flattening, however. This recent price action implies that the market believes aggressive interest rate increases are required to combat sustained high inflation in the short term, but these hikes will impact growth over the long term.

In opposite fashion to the ‘Taper Tantrum’ of 2013 where the Fed was the first mover, we are now seeing the market price in more hawkish policy expectations, despite comparatively dovish rhetoric from the FOMC.

We believe the Fed and the market will meet somewhere in the middle. Policymakers will step up their tapering and rate hike timelines, while the market will moderate its interest rate expectations.

If the last time the Fed tapered is anything to go by, we should see bullish times for equity markets ahead. It is our view that moderate tapering will be viewed positively by the market, as it decreases the risk of more aggressive and therefore destabilising monetary policy down the line.

It also affords market participants the comfort that if growth does slow, the Fed has the capacity to reduce rates once again to provide support as needed.