In the Frame - Issue 5, Market insights

The cannabis theme, currently up in smoke

The cannabis theme first caught our attention in December, when a United Nations (UN) commission voted to remove cannabis from Schedule IV of the 1961 Single Convention on Narcotic Drugs. The decision removed it from being in the company of more dangerous and addictive substances like heroin and cocaine. Many investors around the world looked at this move and saw it as a major step to normalising the substance. Immediately after this announcement, prices of cannabis-related stocks began to climb.

While the change had no immediate material effect on the space, it was seen as a symbolic victory and a sign to nations that it was acceptable to reconsider punitive criminalisation policies. Days later, the US House of Representatives passed the Marijuana Opportunity Reinvestment and Expungement Act (MORE) which decriminalised cannabis on a federal level.

In January 2021, some states in America began renewed efforts to legalise cannabis locally. Lawmakers in New Mexico, New York and Connecticut all made overtures to either medicinal or recreational legalisation. A strong first day of legal sales in Illinois also spurred the belief the industry was profitable.

In February, a group of German researchers published a study demonstrating the benefits of medicinal cannabis on patients with Parkinson’s disease.

By this time, the continued stream of positive news flow had reached equity markets – from the start of November to the 10th February, AdvisorShares Pure Cannabis ETF had appreciated approximately 183%.

We began to initiate investments in the theme during the month of December, and continued to build positions in companies such as Creso Pharma (ASX:CPH), ECS Botanics Holdings (ASX:ECS) and Elixinol Wellness (ASX:EXL) throughout January. 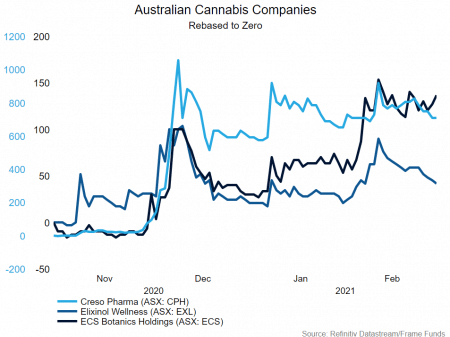 Towards the end of January, it became clear Joe Biden would enter the White House with a Democratic House and Senate. In theory, this would make it easier to pass legislative priorities which strengthened thematic tailwinds and confirmed our view that immanent short-term volatility would present opportunities.

We have since exited our investments in the cannabis theme for multiple reasons.

After significant runs into March, we saw most businesses in the sector become overvalued without any real shift in company fundamentals. We also saw a slowing of progress from a governmental and legislation perspective. When it became apparent further legal developments in the industry would be delayed by Congress, prices began to return to more normalized levels, though still inflated.

In February, companies issued their half-yearly reports and financial statements. The general market reaction was negative, as business fundamentals could not justify current trading levels across the board. 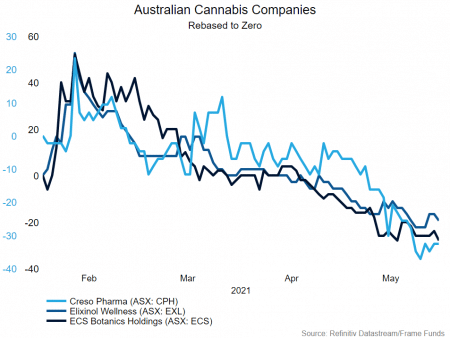 As companies within the sector saw their share price continue to decline in late February and early March, it became apparent the theme required further developments to be in play once again. We subsequently exited our investments.

What we want to see next

To begin reaccumulating investments in the cannabis sector, we would like to see several developments.

The most important is legalisation, not just in the United States but around the world where there are significant markets for medicinal and recreational cannabis.

In the United States, legalisation of cannabis would break the regulatory shackles that has been holding the industry back. It would open access to funding from federally registered banks and allow companies who sell cannabis to trade on national stock exchanges (thereby providing easier access to capital).

Further developments in the medicinal space would also be beneficial for the theme. If positive research continues to be published around the globe, we expect to see renewed investor interest.

Mergers or acquisitions in the sector would also be positive – this would allow larger companies to gain access to better distribution channels and expand market access. Ultimately the objective is to improve business profits and margins, which will make the companies more attractive investments. 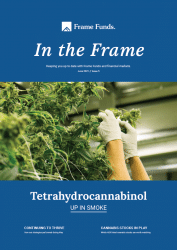