In the Frame - Issue 6, Market insights

The rise of the United States Dollar

The US Dollar (USD) is the most influential currency on earth and its relative strength or weakness has far-reaching implications for the global economy. This piece will discuss why we are bullish on the USD and potential trades that may benefit as a result.

What is causing strength in the USD?

The United States economy has rapidly recovered from the COVID-19 pandemic, aided by the unprecedented level of stimulus from the US government and the Federal Reserve. Inflation and production data have continued to signal increasing strength in the US economy, which prompted the Federal Reserve to bring forward its timeline for increasing interest rates.

Money has flowed into the USD, as investors have positioned themselves in anticipation of the comparatively higher rate of return being offered sooner than expected. The Federal Reserve’s tightening timeline is also shorter than its European and Japanese counterparts.

The US dollar is usually negatively correlated with commodity prices, meaning as the dollar increases in value, commodity prices decline. This is because commodity prices around the world are predominantly quoted in USD – a stronger USD means commodities are more expensive in terms of other currencies. This leads to lower demand and therefore lower prices. While the supply and demand for the underlying commodities have a major impact on prices, a strong dollar may put a dampener on commodity prices.

Emerging markets also suffer when the US dollar gains in value. Emerging economies like Brazil have high levels of exposure to US debt and when the Real is devalued relative to the dollar, the monetary value of debt increases. This means more money is diverted out of emerging economies to service their debt obligations, which results in slower economic growth.

Australian exporters to the US will also be beneficiaries of a stronger USD. Their goods and services become less expensive in US dollar terms and are therefore more attractive in the US market.

Similarly, Australian-based companies that have a substantial amount of business in the United States will report better in Australian Dollar terms. A weaker AUD/USD relationship will mean US-based earnings are higher when converted into Australian dollars. 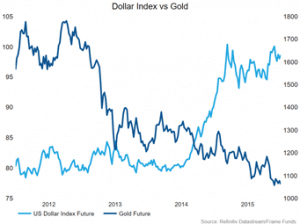 As the United States economy strengthens and the recovery from the pandemic continues, we are see ingan increasing number of similarities to the post-GFC recovery which occurred during 2012. Some of these include a more hawkish Federal Reserve, the effects of fiscal stimulus finally flowing through the economy and a stronger US dollar. We believe the similarities from the period mentioned above are far from over, and expect the US Dollar to continue to rise in the coming months and years. This appreciation may hinder extreme commodity price rises whilst also impacting some emerging markets. We also expect the earnings of Australian companies who do business in and export to the United States to benefit from this theme. 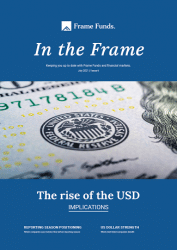