In the Frame – Issue 3, Market insights

Where to next for the Electric Vehicle theme?

One of the themes we have been covering extensively for the last 18 months is electric vehicle/renewable energy mass adoption, and its impact on the battery metal market. Currently 90% of the global grid battery storage market is comprised of lithium-ion batteries, whose inputs include lithium, nickel, graphite and cobalt.

Lithium-ion batteries are also used in electric vehicles, a market that grew to 5% of new car sales in 2020 and is forecasted to grow to 7% of new car sales this year – a 66% year on-year rate of growth (Canalys). The same research indicates that by 2030 electric vehicles will represent nearly half of all passenger cars sold, making EV batteries a key driver of lithium prices. 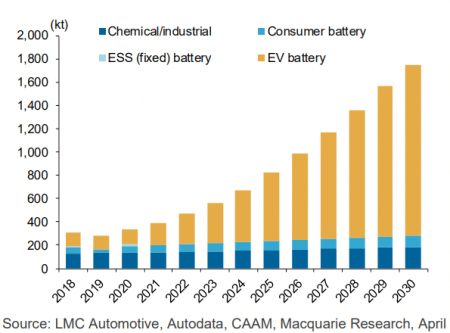 This article will provide another update on the battery metal theme and how it continues to mature.

Global government policies continue to be largely supportive of the renewable energy and EV market, primarily lead by European nations and China. China recently launched a new green energy vehicle industry plan for the next 15 years that aims to develop the electric vehicle market nationally. It also aims to facilitate the shift to greener technologies. This includes guarantees for battery raw materials across the whole supply chain. China is projected to have 47 new giga factories manufacturing lithium-ion batteries by 2030, a growth of approximately 51%.

In our article ‘Battery Material & Rare Earth Update’ released in December last year, we noted the strong European Union policy stance on electric vehicles and the transition to renewable energy. The EU is targeting 30 million electric cars on the road by 2030 and has imposed stricter emissions standards on new car sales. The United Kingdom has also banned the sale of new internal combustion powered vehicles by 2030.

Across the Atlantic, the election of President Biden in November 2020 inspired confidence that the United States would once again return to the renewable energy table. In his recently announced infrastructure bill, he prioritised clean energy technologies, renewable power and electric vehicles, while stripping subsidies for fossil fuels. The investment bank Raymond James estimates $628 billion of the $2 trillion package is linked to climate. The bill also allocates $174 billion to “win the electric vehicle market” by encouraging the development of domestic supply chains, as well as offering consumers rebates for EV purchases. These policies, if passed, should continue to support the growing market for battery metals.

The aforementioned government policies in combination with surging demand have begun to have a material impact on lithium prices and price forecasts. Research from Macquarie suggests demand will outstrip supply from 2022, with material shortages continuing until 2025. This anticipated demand shortage has resulted in 30-100% price forecast upgrades from CY21-CY25. The increase in EV demand and limitations of supply response due to quality requirements have been cited as the key drivers of the upgrades. 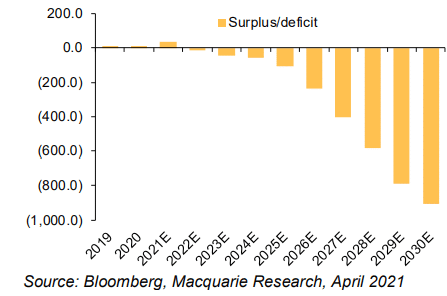 Galaxy Resources (ASX:GXY) are forecasting a “significant growth in lithium demand in the midlong term” due to current supply-side tightness and a looming structural deficit. They have already ramped up production at their Mt Cattlin mine in response.

Syrah Resources (ASX:SYR), who have a Battery Anode Material Project in the United States should be direct beneficiaries of President Biden’s policies that aim to “encourage domestic supply chains”. They remain on track to be the first vertically integrated, natural graphite active anode material producer outside of China and are well placed to profit from the increase in natural graphite demand.

In our EV update, mentioned above, we mentioned we were looking for prices to pullback and consolidate to let moving averages ‘catch up’. This type of price action is very constructive for future price increases.

During March, we saw the prices of GXY, ORE, PLS and SYR all decline by approximately 25% and consolidated near their 100 daily moving averages. Since this consolidation, prices of these companies have swiftly headed back toward their 52-week highs.* ORE & GXY have recently announced a merger, which is another step toward this investment theme being widely accepted as an integral theme moving forward. 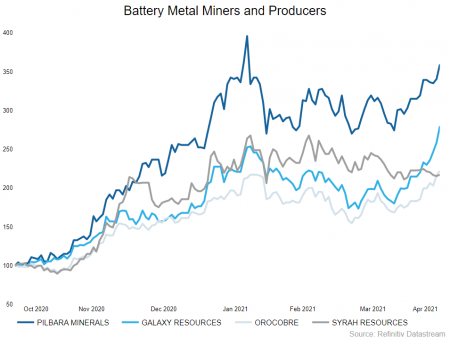 We believe this theme continues to be in play and has plenty of room for further growth, however as always, timing is crucial. 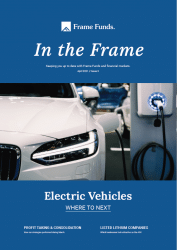